“Life may be nothing but a series of detours.” – Marty Rubin

We’ve all experienced detours – those annoying, roundabout ways we have to take when there’s road construction…the maddening deviations from our planned course of action. Detours take us out of our way, slow us down, and generally disrupt our lives.

There was once a young woman who attended a college lecture by Carl Jung, the founder of analytical psychology.  During the lecture, she had an opportunity to ask, “Could you tell me the shortest path to my life’s goal or purpose?” Without hesitation, Jung replied, “The detour!”

Rather than view them as an inconvenience or disruption, Jung was implying that detours deserve a serious positive look – that in fact, the new path we are forced on to may be the very place where our highest good and our highest goals are realized.

We’ve all had a few detours in our lives: health, relationship, family and financial issues to name a few.  But as Jung suggested, is it possible to look at these situations differently?

If you think about it (and this often means the benefit of hindsight), detours can teach us something and lead to growth.  We come to realize that all of our experiences have contributed to who we are today. 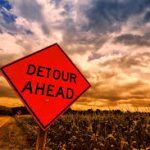 This may be an opportunity.

Let’s look at three people who successfully navigated the detours.  The first was rejected three times from the University of Southern California School of Theater, Film and Television.  He eventually attended school at another location, only to drop out and become a director.  In 2002, thirty-five years after starting his degree, Stephen Spielberg returned to school to finally earn his BA.

Enduring a rough and often abusive childhood, this well-known woman suffered numerous career setbacks.  In fact, Oprah Winfrey was fired from her job as a television reporter because she was “unfit for TV.”

So broke in college that he was forced to drop out, he worked in his garage to start  what became a multinational corporation that designs, develops, and sells consumer electronics, computer software, and personal computers.  After making it a $2 billion dollar company, Steve Jobs was fired.  He used the opportunity to start Pixar, the leading animation company.  He was later recalled to Apple to rejuvenate its performance, and despite being diagnosed with cancer, he revolutionized the company and the environment in which it exists.

Take a moment to think about some of the difficult situations you’ve experienced.  Did they guide you in a better direction?  Did you gain a new outlook or appreciation for something gained or lost?  Did you end up on a new career path?  Did you meet new people who became an important part of your life?  Not all detours are positive, but many come with a silver lining.

Sometimes there’s no avoiding the detours.  Perhaps when you come across the next one, you’ll choose to perceive it not as an obstacle but as an opportunity.  And remember that “detour” doesn’t mean “road ends here.”  If you’re determined, the unexpected bypass will never stop you.

My Children, My Teachers