“Do not look too far for you will see nothing.” – Dejan Stojanovic

My husband and I were walking to work one November morning a few years ago.  It was a few minutes before 7:00 a.m., and the light was still weak.  I was being somewhat oblivious to my surroundings when my husband suddenly stopped and said, “Look!”

I looked down in the general direction he was pointing and saw nothing.  “What?” I asked.

“Right there,” he replied, pointing to a spot on the sidewalk.

“There,” he continued to point.

This time I looked more closely, and there, on the sidewalk, was a shiny dime.  Big deal, you think.  However, my husband knows that any time I see a coin on the sidewalk, I bend down and pick it up, give thanks to the Universe for its display of abundance, and put the coin in a small gold box that I keep tucked away.  My idea is that when the box is full, I will roll up all the coins I have collected and give them to charity.  So I picked up the dime, thanked the Universe, and continued on to work. 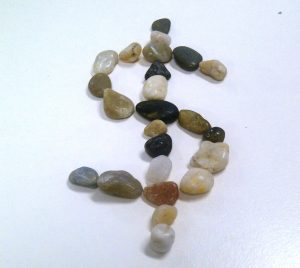 We live in an abundant universe.

That afternoon, as I was walking home alone, I was struck with a sudden realization.  The fact that I hadn’t seen that dime right there in front of me was a perfect metaphor for the challenge I sometimes have in “seeing” answers to life’s mysteries.  Had my husband not been with me, I would have walked right past that dime.  In fact, I probably would have stepped on it and still not seen it, because I wasn’t paying attention.  And yet, that dime was still there, waiting for someone to pick it up.

On top of that, I realized that the times I actively look for coins on the sidewalk, I rarely, if ever, find them.  This is so often what happens when I try too hard to find answers.  I generally come up short.

I read a lot and I meditate a bit, hoping for greater awareness.  A lot of the time I’m disappointed, because I don’t find what I’m seeking.  But the one thing that keeps me going is faith in something bigger – within me, outside of me, and all around me.  It’s just that a lot of the time, I’m oblivious, even when all signs are pointing in one direction.  However, my experience with that dime proved to me that just because I don’t see something doesn’t mean it’s not there.

As I continued home that afternoon, content in this realization, something amazing happened.  I happened to glance down, and there, on the sidewalk, was another shiny dime. This time, I saw it.  And no one had to point it out to me. As I bent down to pick up my second dime of the day, I thanked the Universe for showing me that if you’re alert and open, the answers are there, often when you least expect them.  What a great 20¢ lesson!